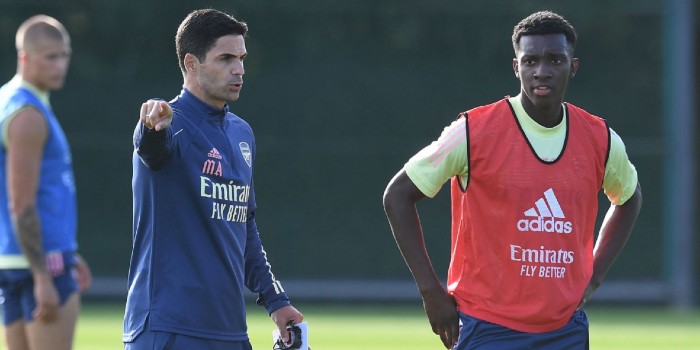 As expected, the press were quick to quiz Mikel Arteta on rumours linking him with the Barcelona hot seat when they got their chance.

There was no cheeky smile or awkward laugh to greet the question in yesterday’s press conference. Instead, his face was as straight as the bat he played.

“There is always going to speculation when there are elections in Barcelona. It’s a huge team. Obviously I was raised there as a player and they’re always going to be linked. I’m fully focused on the job that I have to do here, and we have a lot to do. I’m really enjoying it.”

“We’re in the middle of the season. We have a lot to play for and at the moment it’s not a priority. That’s OK. I still have a contract here and I am happy here. I don’t think that’s something urgent.”

I know it’s his former club and I recognise he’s highly rated within the game, but it must be pretty surreal being tipped to take on one of the biggest gigs in world football just 18 months into your managerial career when you have fewer than 100 games under your belt. All the more so, given his Arsenal side have flattered to deceive in the last six months.

I, like many of you, was pretty optimistic coming into this season. I thought we’d make it difficult for the top four and probably cruise into a Europa League finish. Six months later, it’s strange having an underlying sense that we’re finally going in the right direction while still labouring in 10th place in the table. It’s too early to say we’ve turned a corner, but with the deadwood being set adrift, the young bucks being given a chance to shine and some of our recent results it feels that way.

I just wish I’d heeded the advice of a Southampton fan who messaged me a couple of hours after Arsenal announced Arsene Wenger would be stepping down. He didn’t get his prediction completely right, but he wasn’t far off.

He wrote: “Re: Wenger. Here’s some unsolicited advice. Prepare to finish even lower in the league for perhaps the next couple of seasons. It’ll be a hell of an adjustment, and some fans may find that he was keeping the club stable, and not just holding it back. But interesting times…Be prepared for A LOT of turbulence, and the fact that you will probably now be on the ‘three seasons then a new manager cycle now.”

What’s the term the kids, use? Living rent-free inside my head? That’s precisely what this exchange has been doing for the last three years.

Anyway, basking in the glow of Sunday’s win, I feel we’re on an upwards trajectory. And, more importantly, Arteta seems to think so too. On his side producing better performances and delivering wins, he said:

“We have seen that more consistently now since Boxing Day, even though we have lost some games we probably should not lose but that’s part of football. I think the way the team is playing, there are a lot of improvements but again there are so many things that can still get better.”

The Spaniard isn’t naive, he knows that our chances of finishing in the top four this season are minuscule – I’m sure someone out there can work out how many points per game we’ll need to average to stand a chance – but at the same time, he’s not going to actively dismiss our chances in public. In that respect, he’s truly a son of Arsene.

On qualifying for the Champions League via the league, he said:

“Of course there is [talk of a top four finish] because that’s the aim and that is where we want to take the club back to. We’ve been out of it for the last few seasons but our eyes are always there. It’s true that it doesn’t depend on us and when that happens we have to rely on other people and that’s never good so we’ve got to do what we have to do first. Then, I’m sure if we do what we have to do, we’ll be in a much better position to see where we are with the last four or five games.”

Between now and the end of the season, he needs to eke out the absolute maximum from the whole squad. One of the reasons Sunday’s win at Leicester was so enjoyable is because it was earned by players who’ve had their struggles in the last two seasons. Time will tell whether I’m making more of this than necessary, but it felt quite symbolic that three of our most Marmite players got the goals and Willian, a man who hasn’t split opinions or defences this season, helped out. They’ll be feeling pretty good about life this week and even if they don’t start at Burnley they can take heart from having done their job when called upon.

Arteta wants to see more of that and knows it’s the only way to keep the energy of the collective from waning.

“Trying to keep everyone engaged, feeling important and that they are going to be key for our success in the last few months [is important]. The contribution you can have whether you play a minute, whether you are on the bench or whether you start the game for me are equally important because in the last few months, when fatigue comes in, substitutions are key and rotation is key and when you have the opportunity you cannot demand, ‘I need four or five games now to perform’, you need to immediately and you have to maximise the minutes you get on that pitch.”

That said, he does seem conscious that a few guys still aren’t getting much of a sniff. While Calum Chambers and Gabriel Martinelli are still on the comeback trail following long-term injuries, the likes of Reiss Nelson and Eddie Nketiah have seen their playing time fall off a cliff.

Nelson’s only appearance of 2021 was in the FA Cup win over Newcastle two months ago. And minutes-wise he’s completed less than five games of football for the senior side all season. Since the turn of the year, Nketiah’s stats aren’t much better. He’s played just 10 minutes in the Premier League and 90 minutes in the cup.

You can tell the plight of the latter is causing Arteta a headache.

“When we’re talking about management, this is one of the hazards to leave someone like Eddie out of the squad, but at the moment everybody has been fit and we have so many options up front. But it hurts as well because of how Eddie behaves and trains every day and because he’s a player from our academy, but he will have his chance. He needs to be patient and he’s showing no signs of lacking attitude or anything like that, it’s the complete opposite. He’s a joy to work with and he deserves minutes and if he doesn’t get it, it’s just my fault.”

I’m sure Eddie will look back and laugh at this spell after he comes off the bench in extra-time to score a last-gasp winner against Sp*rs in the Europa League final.

Before I go, I thought I’d shamelessly plug this week’s episode of the Left Field podcast and nudge you in the direction of a supporter Q&A series on the reborn Arsenal Addict site.

Take five minutes out of your day to read the wholesome interview with the absolutely amazing Maria Petri. Hers is an awe-inspiring level of support for The Arsenal.

I’m telling you, octogenarian Cypriot women are one of a kind.

Sam Wood, Libby Babet, Luke McLeod: 5 motivation hacks experts use to get back to their healthy habits