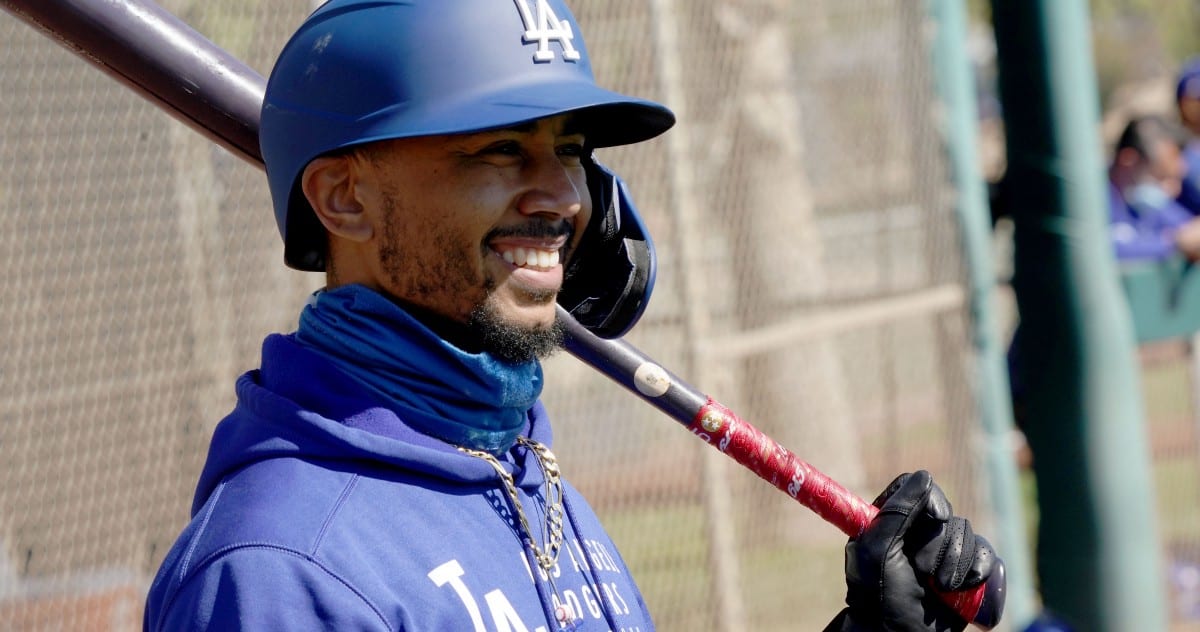 This time, Mookie Betts felt no need to set the season’s tone with another speech to begin Spring Training.

The Dodger outfielder said the way the club overcame adversity on the way to a World Series title demonstrated the team’s fortitude. He doesn’t believe the Dodgers need any extra motivation to try to do it again.

“You fight so hard to get on top, and once you’re on top it’s hard to stay,” said Betts, who knows from experience having won a World Series in 2018 with Boston before the Red Sox finished in third place the following year. “But I think we have a group here that’s good enough to stay, and we have to stay hungry.”

If the Dodgers are to repeat as champions, Betts is likely to play a role in a number of ways.

In his first season in Los Angeles, Betts led all Major Leaguers in Baseball Reference’s version of Wins Above Replacement (3.6). He led all National League right fielders with 11 defensive runs saved. He also led all Dodgers in runs (47) and stolen bases (10), tied for the lead in home runs (16) and won Gold Glove and Silver Slugger awards.

He did all that while coaching up his teammates when they asked for help, including offering hitting tips in the cage to Austin Barnes, who enjoyed one of his best offensive seasons in years.

So, how would Betts classify his own work last year?

“It was serviceable,” Betts told reporters. “It got the job done, and that’s what we’re here for.”

“Mookie, like all great players, they expect a lot out of themselves,” Roberts said. “There were a lot of things he did that were underlying that helped us win baseball games and enhanced the Dodger organization. But I certainly think it was more than serviceable. Ultimately, we won a championship, and that was the ultimate goal.”

Betts said he’ll continue to try to do whatever he can to help the team win, whether it’s offering tips to a teammate or taking an extra base. He said he feels more comfortable now than he did last year after putting in work and building bonds with his teammates. That makes him feel more at ease speaking up and being himself.

“I think when guys can be who they are, that’s when you get the best out of them,” Betts said. “And that’s what I want to create with all the young guys.”

Betts said the culture was created last year, and he believes it’s “here to stay.” That’s why he’s not worried or thinking about a World Series hangover or any mental obstacle entering 2021.

Some players have referenced the inability to fully celebrate their title last year as a means of extra motivation to win it again. For Betts, the chance to “hold up the trophy again” is the only motivation he needs.

“You fix your mind to go into battle,” he said, “and let the chips fall where they may.”

· Roberts said Joe Kelly was out Friday with an illness. He went to the facility to get medication and a test and is expected back Saturday if all goes well.

· Roberts said Chris Taylor will again move around the diamond in 2021 and won’t be the everyday second baseman, though he’ll be in the second base mix with Gavin Lux.

Chance to hold the trophy up again is all the motivation Mookie Betts needs was originally published in Dodger Insider on Medium, where people are continuing the conversation by highlighting and responding to this story.

DJ Amy B is here to reignite our musical motivation